Ayasofya, Istanbul’s defining landmark at the heart of the city in history-soaked Sultanahmet is often referred in guidebooks as one of the greatest monuments a traveler will ever see. From the outside it isn’t very impressive – its exposed brickwork and peeling façade only downplaying and readying you for the dizzying effect it has upon entering this building built in 537 CE by Emperor Constantine.

And how impressive it is!

For a thousand years it was the largest church in all of Christendom. No one could replicate the size of the dome and its magical ability to have been built without any apparent support – it was perhaps one of the greatest architectural marvels since the pyramids. Its only adversaries that caused it to be rebuilt several times over its millennia and a half history were earthquakes.

If we’re gaping at its magnificence today, imagine how the subjects of the various successive regimes of massive empires – from the Byzantium to the Ottomans might have reacted to such a marvel.

The soul of the building was its mosaic work. 30 million gold tiles interpreted Biblical images to create works of art that adorned the walls – Madonna and child, the magnificent Deesis, the Comnenus and many more. The ones I mention have survived till today.

And yet right under them you can also see is the Islamic Ottoman additions – a mihrab (indicating the direction of Mecca) and a mimbar (the pulpit) – along with the four minarets outside.

You see, Ayasofya was converted into a mosque when the Ottomans established their empire in Constantinople in 1453. And it wasn’t until 1934 Ataturk repubicized the country and this mosque and deemed it a museum.

Reeling within the splendor of the cathedral turned mosque turned museum, the only question in my mind was how did everything survive? Today you can still see the Madonna and Child glowing surrealistically in the light from the intricate stained glass windows right above where the altar used to be and where the mihrab stands today. It’s not like the Ottomans couldn’t reach it and simply scrape them off. No, they simply covered it. Temporarily. Images of Christian Gods, preserved, in a mosque.

Ayasofya is a convenient example of the Turkish DNA, which is all about acceptance. Overwhelmingly Muslim at 99% of the population, Turks are incredibly moderate in their interpretation of Islam and still remain a deeply religious people. 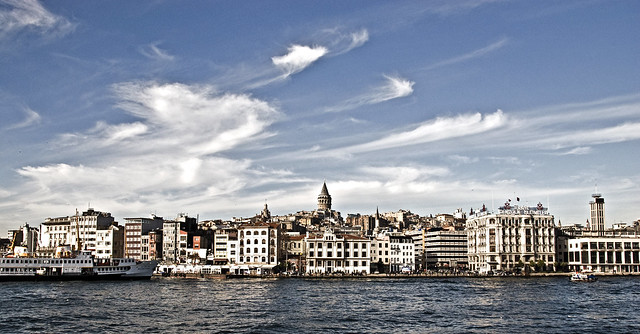 The Bosphorus river splits the country into two geographically and yet in a metaphorical sense the bridges that span across Asian and European Istanbul stand for a meeting of two sensibilities in perfect harmony. The essence of the east mixes seamlessly with the practicalities of the west. While mosques with their magnificent minarets overwhelm the landscape, you’re still in throbbing metropolis that could be anywhere in Europe. While you dine in Michelin star restaurants, you will still have to bargain like a tourist as you would in Cairo or Agra. And while you take a cruise down the Bosphorus shelling out inordinate amounts of cash for a beer, you will still be wonderstruck with the beauty and depth of well-preserved history of the Topkapi Palace.

And yet the Asia-Europe split is causing severe consternation in a geopolitical sense. Membership to the EU is a primary fuss for Turks and the world has their own views on this. Significantly, Turkey was the first Muslim country to recognize the state of Israel and the two countries have shared a less hate-total hate relationship over the years. Israel views Turkey as it’s only ally in the region. The Arab countries detest this. The Turks care not for Arabs, and have deep reservations especially for Saudi Arabia. The Arab countries (save for Egypt) accuse Turkey for turning it’s back on the Muslim world and hankering for an EU membership that will essentially alienate it from its eastern neighbors who frankly don’t have a hope in heel to make the cut (we’re talking Iran, Iraq, Syria here.) Strangely enough this is exactly the reason why Turkey is not yet an EU member with Germany and France having their own reservations on admitting a Muslim country within their ranks.

Interestingly the Arab media initially ridiculed Turkey’s bid for the EU. All that changed in a famous outburst at Davos in 2009 when the Turkish PM Erdogan lambasted Israel with a famous “one minute” quote that is a legend in Turkish pop culture. He promised to not return to Davos. He’s kept his promise in 2010. Immediately the Arab media’s voice changed and now was particularly critical of opposition to Turkish membership in the EU by French President Nicolas Sarkozy and German Chancellor Angela Merkel.

Despite serious communication issues, I had the opportunity to interact with many locals over several days and scratched the surface of the many facets of the Turkish outlook. They’re proud of their roots, often not city-based but in towns and villages of the less-ballyhooed east. They are a sexually liberated people, they love their culture and have an over-the-top patriotic zeal. This is evident in the number of flags of all sizes from little ones on taxi dashboards to behemoths over 60 feet fluttering over the city skyline. When in Turkey, be assured you will always be in view of their flag.

They very much love Mustafa Kemal Atatürk – the architect of modern Turkey and indeed in my own academic imbibitions, portrayed as a modern man with a modern outlook – putting the country on the road to becoming a full-fledged developed nation (indeed Indian textbooks praised him endlessly like a hero our own country could never have), but mostly famous for banning all things religious including head-scarves from all government schools and universities. He rewrote the language (a tough-to-learn but fine language Turkish – extremely logical – it was the basis of the failed attempt at an international language called Esperanto.) He even tried to introduce – against all Islamic tenets – azan in Turkish.

It’s my personal belief that perhaps Atatürk went a tad too far and tried too hard to westernize the country. Banning religious symbols are extreme in their own way, aren’t they? Creating a national identity with a new language – wholly acceptable. Disallowing headscarves, a purely personal choice of clothing accessory … well it’s still being debated.

The headscarf debate I suppose has been on since the 1920’s. On my very first day in Istanbul I came across a long op-ed piece in the nation’s largest English newspaper (Today’s Zaman) titled ‘Headscarves. To wear or not.’ It was as if a trivial issue of the week has been raised to satiate a reader’s curiosity. The truth is that it is Turkey’s favorite dining-room debate. A trip to Üsküdar – a tourist-free, more conservative section of Istanbul was a window to the deep attachment most women in Turkey have to their scarves. And this is within Istanbul city limits. You can imagine the rest of the country. The fact is there are more people today than ever before advocating a political role for Islam in Turkey.

Turkey doesn’t need this brand of artificial secularism thrust upon itself. The people are well aware of their own DNA. They don’t understand Islamic fundamentalism the way the rest of the world sees it and rightly proud of saying so. And even with their headscarves on they see themselves as European. This really is the essence of Turkey. It’s a gateway, a meeting point, a go-between for the East and West. It lives up to it’s strategic geography in a very spiritual sense.

My most memorable moment was sitting at a teahouse in a village off Asian Istanbul at 7 am in the freezing cold in the company of men, each of over 70 years old busy with their morning cuppa, cigarettes and newspapers. It can’t have been very different for them or their fathers for generations. It was impossible to start a conversation because we didn’t have a common language. But there were many smiles, an uncharged cup of tea, and meaningless sentences exchanged. The Turks were warm and welcoming. And I suspect they always have been.

Well, almost. By no means have the Turks got it all right. The Ottoman role in the Armenian Genocide (the term ‘genocide’ comes from here) sticks out like a sore thumb in its history. As do its long-standing issue with Greece over Cyprus and its own Kurdish population who continue to resist Turkification – as with anywhere else in the world it is a country with dark patches of history and its own demons to overcome.

Coming back to history, the cold, inhospitable Anatolian Plateau was the center of the fierce Hittite empire. Theirs was a warrior race and their main enemy: the Egyptians. And still – here is the magic of Turkish soil again – the Hittites and the Egyptians signed the first ever peace treaty the world has ever known after the epic Battle of Kadesh. This was over 3200 years ago. Amazingly, the cuneiform tablet still survives today in Istanbul’s Archaeology Museum bearing the words of Hattusilli III and Ramses II. Significantly, it’s often referred to as ‘the Eternal Treaty’. It is, in a sense Turkey’s promise to itself.