I love Egypt. I love it so much that I spent my honeymoon making my new wife crawl through the claustrophobic stone passages of its pyramids to retracing the steps of Naguib Mahfouz’s favorite haunts in Cairo. I love it so much that I daydream of being an Egyptologist. I like to think Zahi Hawas has single-handedly uncovered more history of the world than anyone else. Some of my favorite books are the clumsily translated historical fiction thrillers of Christian Jacqs.

And now Egypt is on the brink of revolution. And as much as I’d like to speak my mind on such matters, a debate is moot. It’s plainly obvious what should happen next. Also what will happen next, now that the army has taken to the streets. Instead I will talk about my gastronomic adventures in Misr. And hopefully, when you visit this awesome country the next time, you will know – for better or worse – if Cairenne koftas match up to Delhi’s seekh kababs, even though they are technically the same and if the Mahabahiya is really a disguised version of the caramel custard.

In Cairo, the first thing that’ll strike you once your eyes have adjusted after scanning the skylines for pyramids are is its coffehouses, or as you’d be expected to call it – Ahwas. They come in myriad sizes and décor and cater to disparate patronage and yet their spirit and taste – whether it is a small cup of mint shai, a large glass of juice, or even a sachet-made Nescafé – are uniformly singular. Of course Fishawy, tucked away in the heart of the Khan-e-Khalili, is one of the brighter spots with its mélange of color and style of serving in ancient tin teapots and brass trays where every thought of an oppressive hijab is dispelled as you see sheesha smoke engulfing laughter of four women dressed in full burkha regalia playing a game of backgammon. Even Mahfouz sat here, writing. Egyptian men – from 20 to 60 – look to emulate him in the physical presence, if not intellectual pursuit. They’re out in hordes at Ahwas across the city – in its nooks and crannies, bent over a board game with a nondescript sheesha and a pot of shai. Even the alliterative ring to this national identity has its charm. 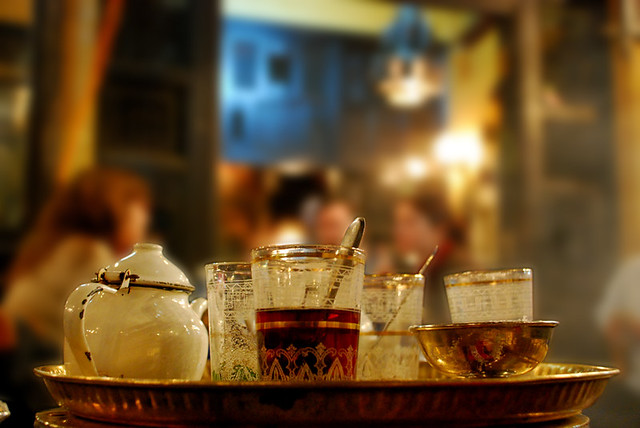 I tried to experience everything – from airplane food to street food, from standalones to the buffet at five stars. Obviously I will not discuss the first and last items (even though there were commendable moments by their standards. With my partner in crime, we ate alone, we ate with locals, we ate at Hardee’s (its called local food fatigue, okay?), and we ate local dessert leftovers for breakfast.

Barely off the tarmac and in a cab with our suitcases getting soaked in the light but steady rain; we insisted on stopping en route to our hotel in the middle of a busy street to try a shwarma. Or shawarma as Egyptians would rather spell it (Wikipedia confirms that both are correct as are chawarma, shawerma, or shoarma). This is of course, the Supreme Cultural Street Food of the Arab world. Should the Middle East ever emulate the EU, it will become the National Snack. It is to them, what the Vada Pav is to Bombay. Should you order this roadside – you get to stuff the filling between pita, baguette, or burger buns. With no amount of charades was I able to demonstrate that I was looking for the filling in a flatbread wrap, you know, the conventional style: Roti! We ended up with what were essentially mediocre chicken sandwiches and a roadside beef burger (the hawker called it ‘chicken bunny’, bunny for bun, and despite being the only two words he repeated a few hundred times, it didn’t taste any better.) One would think that this meal was the result of a communication gap (it’d been only a few minutes on a new continent) – but no, over the next seven days, shwarma’s never looked or tasted as good as the ones you’d get in say … Lokhandwala. Where was that unique texture of mayo, hummus, French fries, and tender and moist roasted chicken coming together?

This is really not a case of Indianization of non-desi food; it is the richness of the Indian adaptation that is always on your mind and forces comparison. My theory? Since the Arabs of the world eat this on a daily basis, shwarmas by need to be less taxing on the stomach and therefore, taste. We eventually went on to try the shwarma at the Beirut Express in London, and … almost made it.

On day three we made elaborate evening dinner plans with a local Egyptian family. To get past afternoon hunger pangs, we were on the lookout for some simple fare. I had some ideas of trying falafel, but then again – off the road – it is often tasteless. It was my 3-day-old cab driver friend who came to the rescue. He treated us to an enormous cooked sweet potato, served steaming hot on the day’s newspaper. It was fun for the first few bites – the heat drawing out the flavours (and the carbs) damping the tastebuds with its sweetness. Then I got distracted with the view of the countryside: Egyptian farmers growing impossibly large cauliflowers and cabbages – over 3 feet in diameter. By the time I came back to the potato it’d gotten cold and limp. It’s a popular item though and is usually served off a donkey cart. Try it. It probably costs nothing.

My expectation that dinner would be the best meal all trip held up. The family – man wife, man’s mother – drove us to a meat haven called Abu Shakra. Here is what we ate and what you should be eating:

The appetite of out hosts was, well, jaw-dropping. I don’t mean to generalize but man were the Egyptians tucking it in (and still looking fit all the same). I could barely get through a kofta and a half and a couple of veal chops, but the 70-yr mother of the man who had accompanied us ate at least triple and the rest of them cleaned up everything else (and we’re talking of food served in kgs – because that’s how they’re listed in a menu – so you get 4 kgs of kofta to save you the trouble of saying 24 pieces. And remember how big the koftas were?)

The Egyptians are slightly obsessive with their juices; you’ll spot a juice stall out of every five shops you pass. And they’re good too. Their strawberry and grape are significantly better than anything you’d find in India and they’ve totally cracked the elusive mango juice. It’s addictive. It also possibly explains the glow on most Egyptians’ faces.

Stella, the preeminent beer of Egypt with its tagline swiped from Nietzche (“That which does not kill us makes us stronger”) is sorely lacking by international standard. A less popular brand, Luxor, is twice as good. One would think Egyptians would know a thing or two about beer considering it’s been the beverage of choice since Pharaonic times and also given the weather. Ancient Egyptians might have been the first to figure how to make beer and wine and certainly drank a lot it; no set of hieroglyphics is complete without a beer guzzling Pharaoh etched in stone, the ones at Saqqara are especially testament to that. But availability outside central Cairo can be a problem. It took me three days to find my first beer outside the hotel.

There were some other highlights too – Turkish coffee, a strange purple guava juice in Coptic Cairo, and of course the Hardee’s signature Superstar burger. Yes. Everyone needs a familiar taste once in a while.